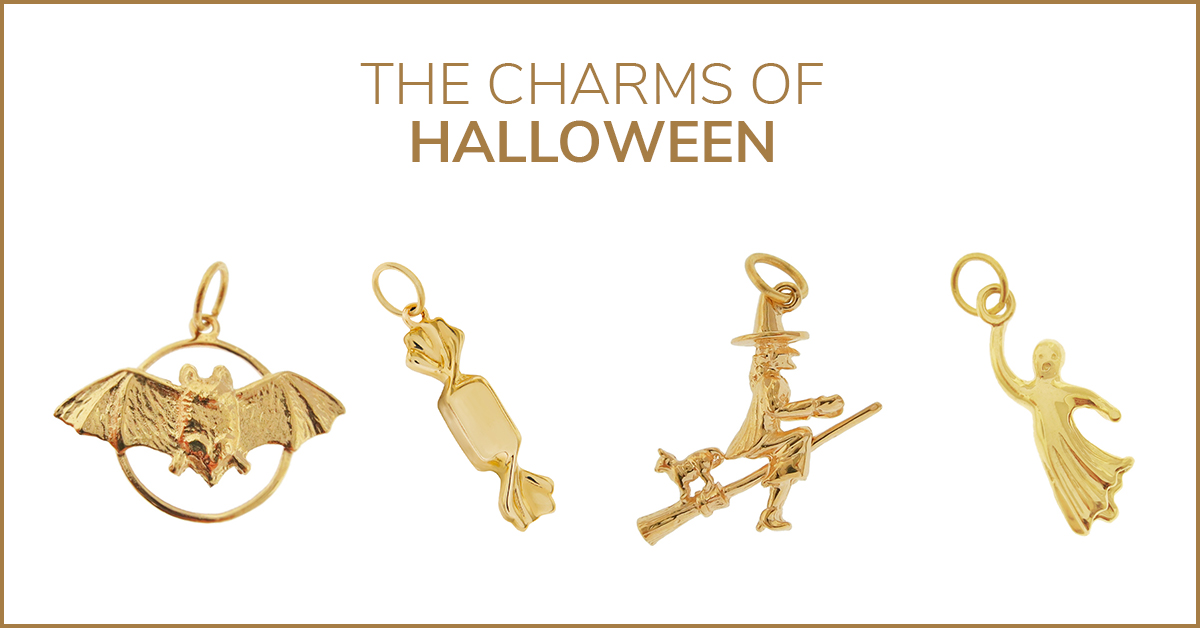 Halloween has quickly become one of America’s favorite holidays. It’s perfectly sandwiched between Labor Day and Thanksgiving, and the temperatures are usually just right for costumes, bonfires, and flare!

Charmco makes the best 14k gold charms to celebrate the special occasions in your life, from having a baby and getting a new puppy to graduation and visiting Paris. We offer vintage charms as well, and we are constantly adding to our collection. One of our most popular series of gold charms for bracelets is our holiday collection, which features the best in Halloween offerings. Below, we’ll take a look at just a few of our spooktacular charms. Order yours today!

Halloween is associated with things that fly. What better way to celebrate Halloween than with our Bat 14k Gold Charm. This small gold charm features a bat in a circle with its wings outspread. Some speculate that bats are associated with Halloween because in ancient Celtic times, large bonfires would be lit to ward off evil spirits, which attracted bugs, which, in turn, attracted bats. Once word of vampire bats spread after their discovery in South America in the 1600s, people began to associate them with human vampires and witches as well. Throw in the fact that bats are nocturnal, and a new Halloween symbol is born.

Speaking of flying things, the quintessential symbol of Halloween is ghosts. Check out Charmco’s Ghost 14K Gold Charm that features a ghost holding onto a ring as it flies through the night. Ghosts or spirits have always been associated with Samhain, which is the ancient Celtic Festival that led to Halloween. For almost as long as human history has existed, humans have believed in the spirits of the dead still walking the earth. Since Halloween is right before All Saint’s Day (a holiday that celebrates our ancestors), it’s a perfect time to celebrate ghosts with this small gold ghost charm.

To complete our flying charms, Charmco’s Flying Witch On Broom 14K Gold Charm will both delight and surprise you. Featuring a witch on her broomstick with her trusty black cat in tow, this movable charm has the witch moving up and down as she flies on her merry way. Believe it or not, witches means “wise one.” In ancient times, there were women who were very skilled at herbal medicines, homeopathic treatments, and helping in childbirth. In reality, these ladies were the first doctors of our time.

Once Christianity took root, many of the men in the church did not believe women should be healing others. These women began to be associated with the devil and heresy, and many people avoided them and even feared them. The culmination came with the Salem Witch Trials in the early 1600s where men and women were falsely accused of being witches.

Luckily, today we have a very different view of women and of witches. Witch costumes are one of the top sellers every year for Halloween, and it’s a girl’s go-to for a last-minute Halloween party invite. Celebrate Halloween with this small gold witch charm today!

For good or bad, candy is as ubiquitous in Halloween as are pumpkins. Charmco celebrates Halloween candy with our Candy 14k Gold Charm. The rise of candy as an integral part of Halloween can be a bittersweet story. It began right before World War I when candy makers in the United States were searching for a way to make more money outside of Christmas and Easter when candy was traditionally given. Searching for a fall holiday, they hit upon the idea of creating their own day, Candy Day, in October.

Parents next helped out the candy industry by searching for an alternative to tricks on Halloween. As moms became busier and busier, prepackaged candy seemed like a great alternative to hand out on Halloween rather than nuts, coins, or toys. Hence, since the 1960s, candy has been the traditional gift on Halloween day. Celebrate with Charmco’s small gold candy charm today!

Instead of a t-shirt, a postcard, or a souvenir you’ll lose, investing in a small gold charm by Charmco that you can wear as a necklace or bracelet is a permanent reminder of the good times you’ve had. Browse Charmco’s extensive collection of small gold charms and vintage gold charms for every occasion today!